The Right Guy for the Job 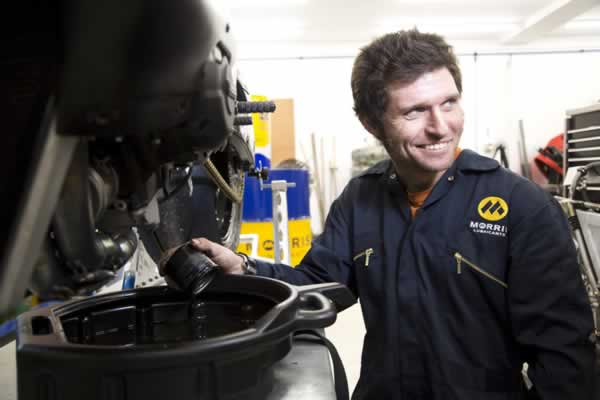 The Right Guy for the Job

From repairing heavy trucks to biking across the USA, Guy Martin is about to take on a new challenge as brand ambassador for Morris Lubricants.

One minute he may be under a truck, the next racing around a road circuit on a superbike or taking part in another challenge for TV, but Guy Martin remains as down-to-earth as a Lincolnshire lad could be. Now as a brand ambassador for Morris Lubricants, will put his talents to work in promoting both the company and its products.

Yet despite being a big media personality, you’ll always find Guy getting covered in grease and oil underneath a truck. “I got interested in fixing engines as a two-year-old, or maybe younger as I was in a nappy,” he says. “I used to sit on the workbench and watch my dad spannering something.

“Fixing trucks is a proper job, and I get satisfaction from working on something that is part of everyday life. If everything else I’m doing goes away, then I can still fix trucks, and I like the way I can control that.”

Fame isn’t changing
Of course, Guy is in the public eye for more than just his abilities with a spanner, but having always maintained that he’d never give up his day job, it’s more the opportunities his life in the public eye offers, rather than the fame, that he enjoys.

“I get a lot of attention if I go to certain places and events, so I try to avoid them. I didn’t want to be famous, but the opportunities I’ve had to do all this mad stuff has been great and I’m lucky to have the support,” he says. But what keeps him rooted?  He adds, “The truck job keeps my head away from my own arse!”

He does accept how things have changed, however; “I can’t even pop to the shops for a bottle of milk without being recognised, but folk mean well and are always friendly.”

Despite not looking for the fame, Guy was thrust into the spotlight after being approached while taking part in the Isle of Man TT races in 2009. “A new lot called North One Television came in to cover the racing,” he remembers. “Like other riders, they’d filmed with me before the racing and then some more at the TT itself. One of the Producer bods called Andy Spellman said he reckoned I could do more than talk about bikes, and he came and saw me after the TT, and we got a plan with Neil [Duncanson], the boss at North One TV. I didn’t think anything would come of it, but in 2010 we started making ‘The Boat That Guy Built’ series for the BBC. Spellman and Neil have been working with me since.”

On his bike
The TT may be where it all started for Guy regarding his television career, but he had been competing at the famous road race since 2004. But what led him to the world of bike racing?

“I crashed my Kawasaki AR50 (I’d bored it out), on the road one year, and thought I’d better get on the track before I ended up really hurting myself!”

Of course, hurting himself on the bike almost became a habit, with some spectacular crashes, including at the TT in 2010 and again last year, something Guy describes as one of his scariest moments. “My bike went into neutral when I needed a gear (to help brake) to make the corner, I crashed at maybe 140mph, I wasn’t scared, but it does make you think ‘how the bloody hell did that happen.”

But what makes him continue? “It’s part of the game really; you have to expect it. I like pushing myself and if I think I can be fast or will enjoy it, I’ll have it,” he says.

New adventures
On TV, Guy has done everything from building boats to exploring China, but his best adventures have also been his most competitive and challenging. “Racing at Pikes Peak was the best thing ever,” he says. “Doing the Wall of Death, and going up against David Coulthard in his F1 car were also brilliant too. But The Tour Divide [an 18-day mountain bike trail across America] was probably the best thing I’ve ever done. I know how lucky I am to be doing these things!”

Some challenges take a bit more to get accustomed to, however. In 2016, he attempted to break the motorcycle land speed record in a Triumph Streamliner rocket-powered bike. “Was a totally different way of riding and I said that was something I didn’t mind giving everything for,” he says.

Perhaps one of his most ‘pressured’ tasks was taking part in a Formula 1 pit stop with the Williams team at the 2017 Belgian Grand Prix. In a world where a split second mistake could cost points, let alone a race win, Guy was tasked with removing the left-rear wheel in the race, but what did he think of the pressure? “I was alright really, I knew what I had to do, and it was bloody great. The work those boys put in behind the scenes and the hours, fair play to them.”

Yet despite these adventures, Guy is still firmly a down to earth bloke. “I enjoy the variation, I can be sat under a lorry one day, and the next be off to China or trying to stop the dogs chasing pheasants,” he remarks. “I have to be busy; I go crackers if I’m not!”

Interesting transport
When it comes to motoring, working on trucks and motorbikes gives Guy a great view of the different technologies, but what’s his favourite? “All sorts really,” he says. “Trucks are interesting as the technology is way ahead of cars in some ways, I like building my own cars and bikes my way, as conventional stuff, especially in bikes, hasn’t changed much.”

As for his favourite vehicle of all time? Again, Guy is down to earth: “Britten motorbike is up there, my Volvo Amazon is spot on, but you can’t beat a Tranny [Ford Transit] van,” he comments.

But there is one mode of ‘transport’ Guy owns which can be described as an indulgence. A Rolls Royce Merlin engine, which was once found in the Spitfire and Lancaster Bombers of the Second World War.

“I’m from Lincolnshire, RAF Scampton, Waddington, Conigsby are all close by, and the RAF has always been part of where I grew up,” he explains. “I’ve always been fascinated by the Merlin engine and Spitfire; I was named after the fighter pilot Guy Gibson.

“So I found one that was on a trailer, with a full-size propeller, controls and a seat. It didn’t need any work, and it’s bloody amazing. I had it at work for a while and used to fire it up sometimes.”

However, it wasn’t all plain sailing as Guy remembers: “It has a limiter on it, and I thought it was a good idea to take that off, what I was thinking I don’t know! Honestly its the most scared I’ve ever been as it started moving once it came over the inertia and I couldn’t stop it. It smashed through a set of metal stairs and sent one of my pushbikes up in the air before I could stop it. The prop didn’t have a scratch, but the workshop was a mess!”

Brand ambassador
Working with Morris Lubricants is a new opportunity for Guy. “I like the fact they’re British, have a range of everything you could need and are good honest folk,” he says. “They sent me a load of samples, and I didn’t know how many products they had and it's all good stuff. Whether it’s on the trucks, cars or bikes, even my tractor, the quality is spot on.

“I’ve run it in my tranny van, the trucks and a few of my bikes as well.”

Working with Morris Lubricants also gives Guy plenty of different opportunities, including the possibility of ‘brewing’ his own oil. “I'd be up for that, I’m not an expert on oil, but I'd be keen on learning!”

With the oil and lubricant company’s exploits across motorsport sponsorship, including in truck racing, would that be another adventure Guy would like to take on? “Never say never, I’ve raced a lot of interesting cars and bikes so maybe,” he remarks.

Finally, there is one question that many must be asking. What is Guy’s favourite brew? “Yorkshire Gold is my go-to but wet and warm and she’s reet,” he remarks.