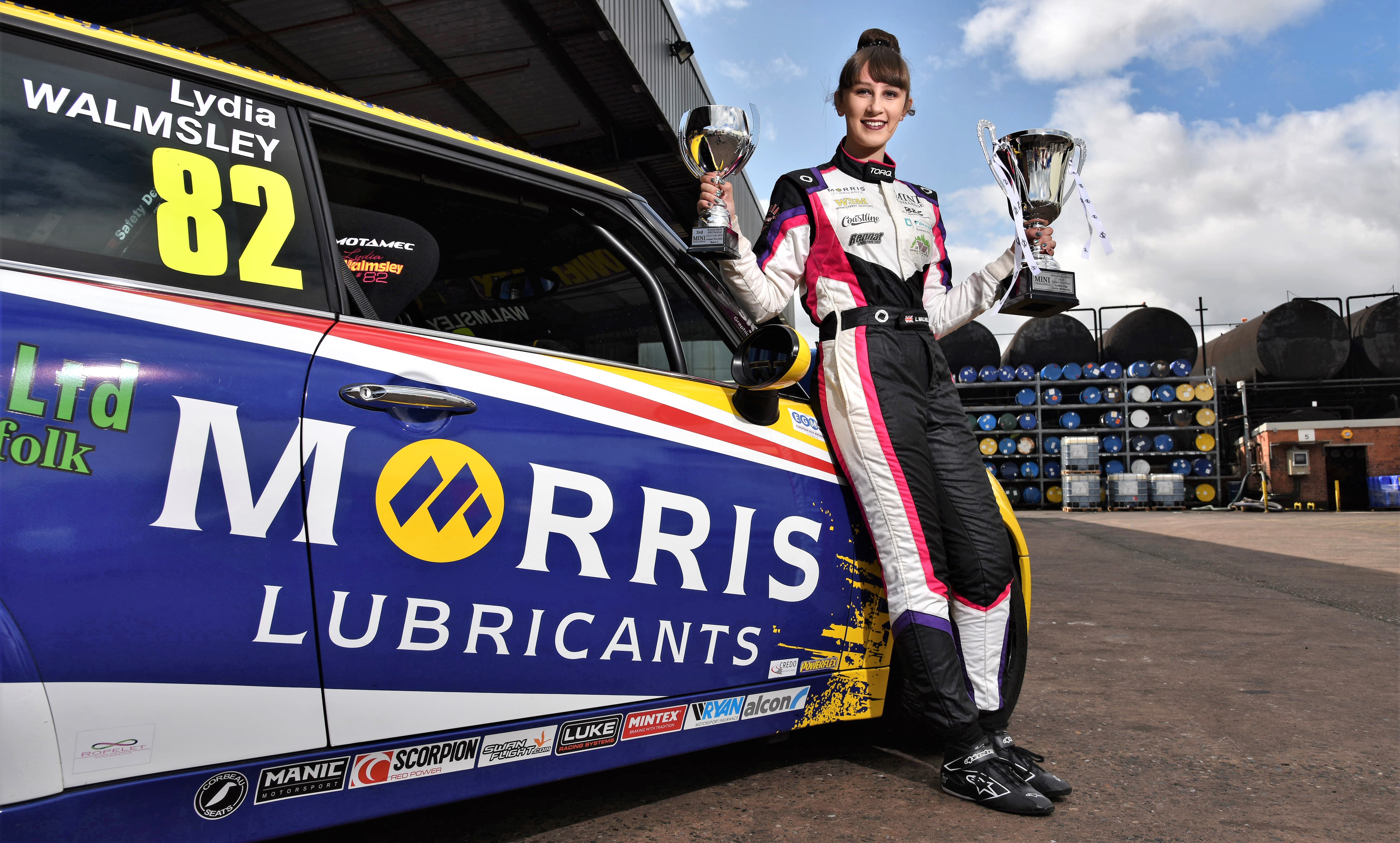 “I’m excited to be broadcast live on TV, but when I’m racing, there are no distractions”

Humbled by her global following, but impassioned to stand out on track, 18-year-old Morris Lubricants racing ambassador Lydia Walmsley is not to be underestimated.

Competing as a Morris Lubricants racing ambassador for the third year running, Lydia Walmsley has already secured an off-track victory this season.

Days before blowing out the candles on her eighteenth birthday cake –  topped with a mini version of herself and her Mini Challenge race car – Lydia received the Jean Denton trophy. The award is given for overall best performance by a competitor in her first year of full membership by the British Women Racing Drivers’ Club.

“I try not to compare myself to others, the majority of people my age are on very different paths to me,” says Lydia, who is committed to passing her A Level exams this summer.

“It’s difficult to juggle everything that comes with racing along with school and social life. There’s a lot more to it than meets the eye; working on press releases, social media content and raising sponsorship, it all occurs before I even make it to the track. My biggest fear is running out of money before I achieve my dreams.”

With her exams cancelled due to the coronavirus outbreak, Lydia is unsure how her final grades will be calculated, but it hasn't dampened her determined spirit.

"My predicted grades and mock exams went well, so fingers crossed the end results will be just as good!"

Lydia made her Mini Challenge Championship debut at sixteen, before she was even allowed to drive a car legally on the road. At seventeen, she entered the season for a second time without a podium, but a combination of “perseverance and hard work” saw her complete it with five – including her first race win.

“It was the last race of the season, and I won from the front row of the grid. Hopefully this year we, as a team, can achieve victories that are even more rewarding – perhaps from a reverse grid position where we have to fight through the pack. I’m raring to go!”

Whilst totting up practice laps in the Cooper Pro class at her home circuit, Snetterton, Lydia took members of the Morris Lubricants team out for a spin to show them how she intends to beat her 2019 championship fourth place position. 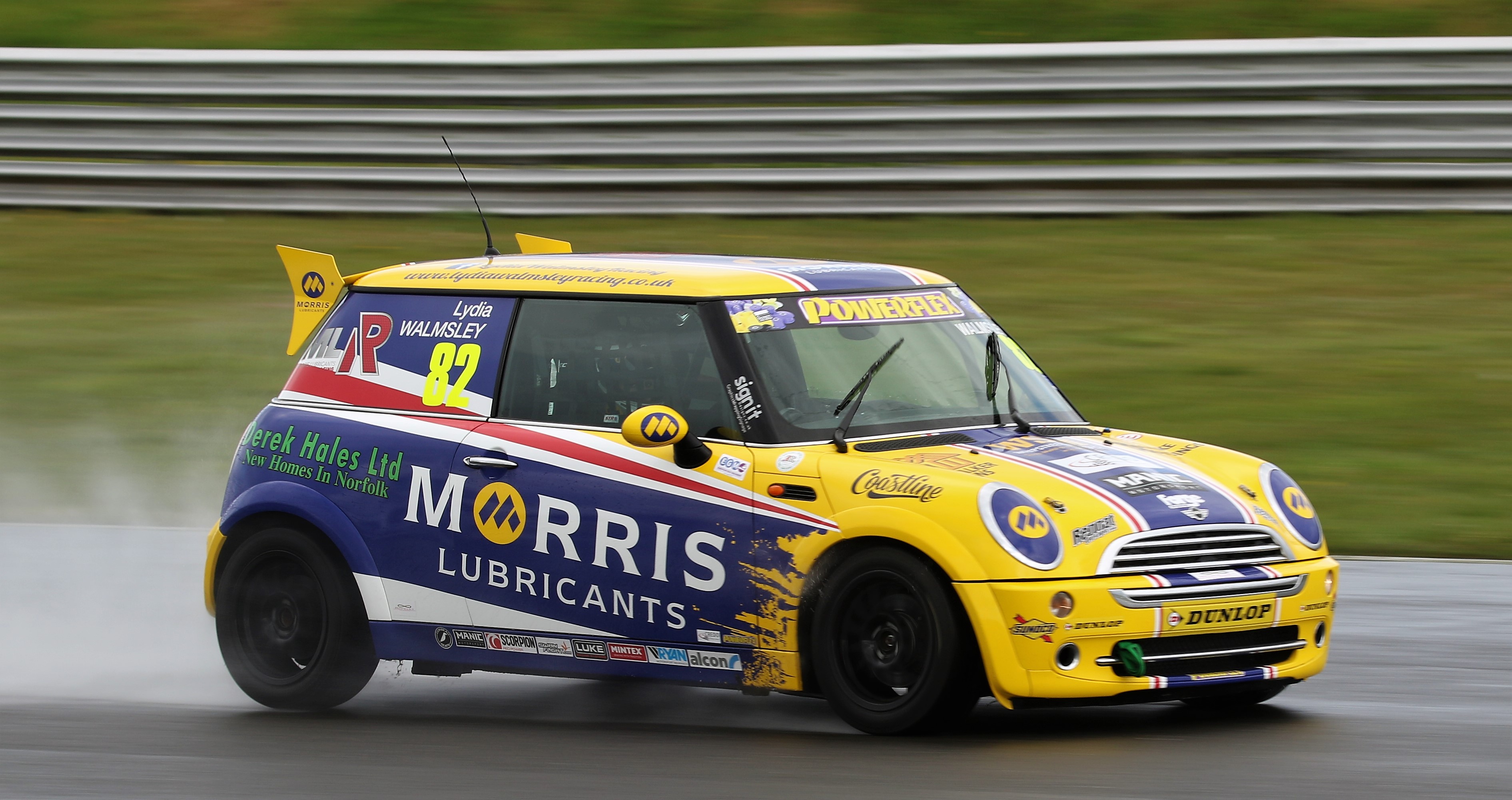 “People look at a little Mini Cooper and underestimate what it can do on the circuit, especially with slick tyres, so I think it came as quite a shock – in a good way!”

When she’s not behind the wheel, Lydia works hard behind the scenes to make sure she, and the car, are as unbeatable as possible. Together with her mum, Hilary, instructor Joe, and mechanics Mike (Lydia’s dad) and family friend Dave, she studies data that’s collected during each drive. Scrutinising past race performances is also vital to devising tweaks that could secure a victory.

“My support network is amazing, but the best thing about the motorsport community is that there are some very loyal fans, I recognise people that appear at every race meeting. The first time a young fan asked to sit in my car for a picture and an autograph was surreal! I’m just an ordinary person!”

Before Motorsport UK's decision to suspend all motorsport events until at least 30th June, Lydia had been preparing for two high profile weekends of racing this season - the first at Thruxton on the 16th and 17th of May, which has been postponed, and second at Silverstone International on 26th and 27th of September. Both were due to be broadcast live on ITV4, giving Lydia the chance to reach a new audience beyond the grandstand.

“I was really excited, it would have been a brilliant promotional opportunity for my team and my sponsors! I would be lying if I said I wasn't gutted. Racing is what I love to do most, however, the health and safety of my family, friends and everyone in the UK is far more important to me than going to have a play in our race cars."

The British Touring Car Championship are hoping to reschedule as many dates as possible, but Lydia is managing her expectations with a level-headed approach.

"Who knows if we will get the opportunity to race at Thruxton with the BTCC, we'll just have to play it by ear. I still have hopes for September, but it seems such a long way away from this point. Nobody knows how long this pandemic will last so we'll just have to wait and see. But, when I do get to race again, there will be no distractions. It is just me, my car and the other competitors on track."

Until then, Lydia is helping her dad to build a brand new race lorry in their front garden, and continues to build her global following through social media. She regularly receives likes, comments and messages from people who use Morris Lubricants products from different parts of the world.

“Morris Lubricants export to over 90 countries, so to be involved with such a massive company who are doing so well is a privilege. It takes you by surprise when people interact with your social media posts from the other side of the globe.”

"In light of the current situation, I've aimed to give a positive message on social media. If I can brighten someone's day that would be mission accomplished!"

Spending more time online than on the track, Lydia is doing what she can to make sure she's fully ready to go when she gets the green light.

"It could be a week before we race and we need to be ready! I'm committed to keeping up my training going as best as I can using a simulator - it's not quite as good as the real thing, but it's a pretty good substitute."

“It’s an honour that Morris Lubricants put their faith in me as both a racer and an ambassador to promote their brand. Without them, I wouldn’t be on the race track.”​​​​​​​

What would you like to tell motorsport fans during this tough time?

Sit tight! We will be racing at some point, even if that is not until next year and we will enjoy and appreciate every second much more than we ever did before when it returns!

Describe yourself in three words

The umbrellas! Typical British weather meant it rained at every single race meeting we had last year. Using their umbrellas allows my race suit to stay dry to avoid fogging the windscreen when I get in to race.

Biggest lesson of 2019
Croft’s first corner kerb is not to be messed with!

Will it always be about the Mini?

Fingers crossed, next season I’d love to be racing a JCW Mini which is the next step up from where we are now. However, my ultimate goal is the British Touring Car Championship. There aren’t currently any Minis in the BTCC so it would be amazing if I were able to be one of the first! But I’m not limited to Minis, if the right opportunity came along further down the line, I’d love to take it!